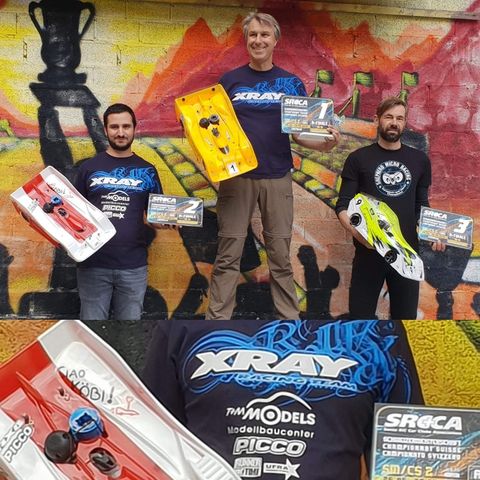 It was my first race of the season and no practices since the last race in September 2018. I worked together with the other RX8 drivers like Luca Martinelli, Henzi Thomas and our new entry in the team Nydegger Jürg. They already had a lot of laps of testing this year and they helped me a lot in the first half of the day. Than I start trying different improvement with Traugott Schär and we find a perfect setup, the car was fast and easy to handle. The Xray Team was really fast at the end of the practices.

The weather forecast wasn’t the best one, but we could run the 3 controlled practices on a dry track and the first qualifying round too. I won it and I was really happy with the feeling I had on my car. Unfortunately during the lunch break start raining and than we ran 3 round on a wet track. It was really difficult to find the right tires for this conditions. At the end I ended second behind Luca Martinelli and without the SuperPole there was 3 RX8 direct in the Main Final.

Today the rain wasn’t expected. During the practices for the finalists I saw that the car was perfect and I only prepare the tires for the final.
From the 2 semifinal also Thomas Henzi and my colleague Cannas Roberto reached the A-Main. For Cannas it was his first A-Main. So we had 5 RX8.2 on the grid! That was already a super result.
In the Main Final I start really fast, after 4 corners I was already in the lead and I dominated the first 12 minutes, than I had a crash with another driver exiting from the grass and I broke a tire. Traugott and Kevin changed the tires and I started to recover. After some minutes I was already chasing Luca Martinelli for the lead. 18 minutes to finish I decided to change the tires, unfortunately we had some trouble in the pit and I lost too much. I tried to push the car to the limit recovering on Luca, at 5minutes to the finish I was 2 seconds behind him, but my tires were gone. In the last minutes I lost 4-5 second because it was really difficult and I ended in 2nd place behind Luca.

At the price ceremony I showed a “memorial” body to remember Bühler Jakob “Köbi”. He left us in the night of Saturday 18.05.2019. The Swiss RC community loses a very helpful and always happy friend, always ready to help and motivate everyone. We’ll miss him!
Mattia